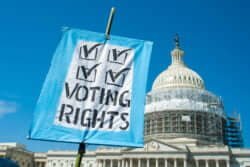 Voting Rights: Today, there is a real danger in this country, including right here in Michigan, where some politicians have taken it upon themselves to make it harder for certain people to vote. These vote-repressors are more aligned with authoritarian dictators around the world than our proud American traditions that have steadily broadened the right to vote as our country has grown.

I believe in the sanctity of voting rights as the bedrock foundation of American democracy. Election integrity is of course important, but voter fraud has been shown time and time again to be exceedingly rare. The drum beat of “fraud” is a red herring used by some politicians as a pretext to make it harder for people who don’t support them to vote. For the most part, these are younger people, older people, people of color, and people living in urban centers. It’s hard to think of anything more un-American than suppressing the right to vote.

I support safe and secure elections, and support any responsibly written and reasonable law that will make it easier for all Michiganders to choose the government they want at the ballot box. The government belongs to us; our vote is sacred. 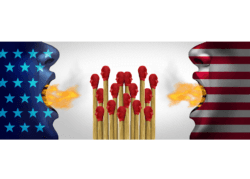 Responsible Governance, not Culture Wars: There are many issues which well-meaning Americans can disagree on. From laws regulating crime to the education of our children there are ways that we should be able to assess an issue, gather data, have a reasonable debate, and do what the majority believes is broadly in the best interest of the people. This is becoming harder and harder as political polarization becomes more and more ingrained in every aspect of our society. One of the largest problems is that of the battle of the “culture wars.” The problem is that culture wars often involve the choices of private individuals. I believe there is no good reason we should allow private issues to strip us of our ability to have thoughtful government. I will work with anyone who is willing to collaborate thoughtfully on the problems that Michiganders face, and I won’t be bogged down by culture wars, which are little more than a pot-stirring distraction. 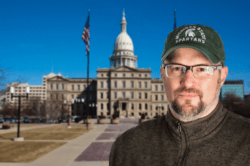 Public Service: I am running for office for one reason: I want to serve the people of my district. That’s what it means to be a public servant.

Last year, the majority of the Shiawassee County Board of Commissioners either forgot, or in some cases perhaps never understood, this concept. The commissioners attempted to award themselves a large portion of the federal relief money from the American Rescue Plan Act (ARPA), which was meant to support communities struggling during the pandemic. What they did may or may not have not been illegal; there are investigations pending. However, there is no question that they did something that no public official, entrusted with governmental authority by the votes of their family, friends, and neighbors, should do: they tried to profit from their public service. There were plenty of other, non-elected county government employees, such as police officers and other first responders, who deserved that money, as it was intended to be spent. Instead, they decided to damage public trust in our local government by placing their own self interest before the public interest.

I promise to be a true public servant, and I’ll be accountable to the people of our district first and foremost.

Government IS the People: A negative view of the government is all too common these days. Granted, the government, at any given level, can and has made mistakes. To err is human, and that’s what our government is: WE the people.

The negative view of government is largely due to a decades-long campaign by monied interests to erode the power of people-managed institutions; they would undermine every government function to get what they want: little to no regulations and little to no taxation. Regulations can be burdensome, and no one loves paying taxes—I get it.

But the pool of money we all contribute to, and the regulations that provide for worker safety and community harmony, are necessary to peaceful cities and towns, a thriving economy that works for everyone, and an environment we can be proud to pass to our children. The structure of government is how we partner with one another as members of the same community to solve problems peacefully, together. It’s the social contract, and it’s essential to a modern society.